‘The King’ – Roberto Carlos brings his unique magic to the UK

Compartilhar: No facebook no twitter Por e-mail
Home » No mundo » ‘The King’ – Roberto Carlos brings his unique magic to the UK 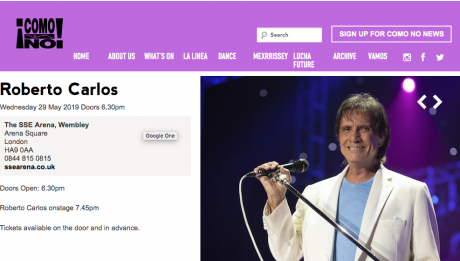 With a career spanning 59 years, Roberto Carlos – ‘The King’, as he is affectionately referred to by his fans the world over – brings his mystique, romance and enigmatic personality to the UK for the first time since England won the World Cup in 1966. Much loved for his unique career, packed with hits such as Detalhes, As Baleias, Mulher de 40, O Calhambeque and Esse Cara Sou Eu, this promises to be an evening like no other.

With over 125 million records sold worldwide and having recorded in Spanish, English, French and Italian, as well as his native Portuguese, Roberto Carlos brings to London his illustrious tour Amor Sin Límites – also the title of his most recent album, featuring Alejandro Sanz and Jennifer Lopez.

Born Roberto Carlos Braga in a small town in the interior of Brazil, he first performed on a local radio station at age 9. Inspired by Elvis and Little Richard, he went to Rio as a teenager, singing and playing guitar for bands until he managed to get a recording contract as a solo artist. He had some of his biggest successes with cover versions of American rock ’n’ roll and pop hits like Splish Splash, Road Hog, Unchain My Heart, Alley-Oop and The Wanderer. But around 1965 he began to emerge as a songwriter with a knack for divining what would appeal to the record-buying public, usually writing with a friend and band mate from his teenage years, Erasmo Carlos Esteves.

Singer and composer of over 600 songs, and the greatest example of the Jovem Guarda (Brazilian musical movement of the 60s), Carlos consolidated his success in the 70s with romantic songs, building his career around ballads that speak of love, solidarity and faith in tomorrow. In 2015, he was honoured as Personality of the Year at the Latin Grammys and by Billboard with the Billboard Lifetime Achievement Award in recognition of his outstanding career.

Presented by Como No, Backstage and Bossa FM.